Our Pyjama Appeal campaign, which took place during November and December 2017, aimed to raise urgently-needed funds to look after the 200 children we care for at the refuge each year. We run the only refuge in Devon for women and children fleeing domestic violence. The children often arrive in just the clothes they’re wearing, and so a pair of new pyjamas is essential, but donations were also spent on food and other care.

NDADA’s CEO, Sue Wallis, said, ‘We are so grateful for the support and enthusiasm shown by individuals, schools and businesses during the Pyjama Appeal. Not only did the donations make a difference to the lives of women and children this Christmas, it also raised vital awareness of the work we do here at Devon’s only refuge.’

As well as seeking individual donations, business and schools got involved in our fundraising event: Wear Your Pyjamas to Work or School day on Thursday November 30, 2017.

A special thank you to the following schools and businesses who shared their pictures on the day: 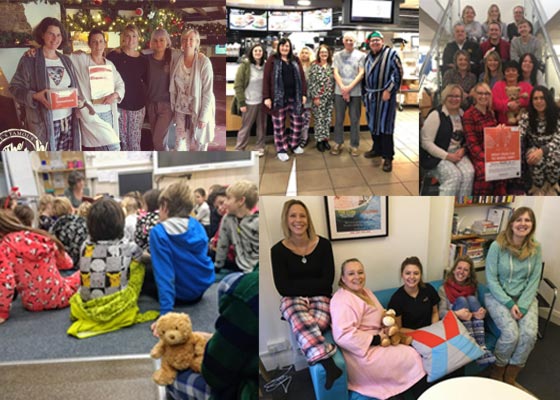 We would like to give special thanks to Brewer Harding & Rowe for their support in this campaign.

Donations received from the Pyjama Appeal went towards pyjamas and other items needed to care for women and children at the refuge.